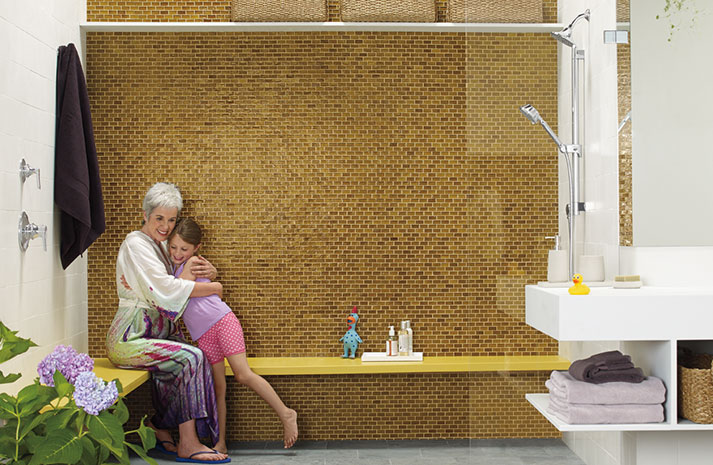 Come One, Come All

As much as things change in the way we live, it’s a surprising trend that more and more, multiple generations of the same family are living under one roof. Surprising, because for a long time it had seemed from a bygone era: 100 years ago, more than half the U.S. population was living this way. Today, the total number of Americans in these arrangements has doubled since 1980, and between 2007 and 2010 the number of homes with more than one adult generation grew 14 percent.

It’s a trend that’s approaching leaps-and-bounds territory, and it’s due not just to obvious factors like an aging Baby Boomer population. Bigger factors are increasing numbers of children returning home after college, and aging parents moving in with their children instead of into assisted living facilities. In bringing the family closer together physically, it requires compromises and accommodations, especially in shared quarters such as the bathroom.

But this sort of bathroom accommodation doesn’t have to take a stark, clinical turn at all. In fact, most of the features that make life easier for the aging – things like walk-in showers, grab bars, hand-held shower spray, seating, non-slip floors and grab bars, high-seat toilets and lowered sinks – are all available with the same, high degree of design that parents and grandparents have always outfitted and decorated their homes with. Aging in place, it turns out, can still be stylish and comfortable.

Turns out that the family bathroom is more than just a nexus of family activity – it’s also is a harbinger of broader living trends. And in addition to an extended family’s financial savings of sharing space and the emotional value of sharing time, meals and memories together, making the sort of accommodations required in the bathroom has its own benefit. Many of the design and layout issues that impede easy use by some members of the family often create lesser annoyances for everyone else. Solving them once solves them for everyone – and for good.