TOTO is known worldwide for its sustainable, high-performance toilets, and many people wonder what makes them so unique. So, we thought we'd take a few minutes to share a little background on TOTO, our world-renowned toilets, and their ground-breaking technologies.

TOTO is the largest plumbing manufacturing company in the world. For over 100 years, the TOTO Global Group has been recognized as the worldwide leader in innovation and precision engineering in elegant, high-design products that enhance the bath space. Since its incorporation in 1917, environmental stewardship has been one of TOTO's core missions. 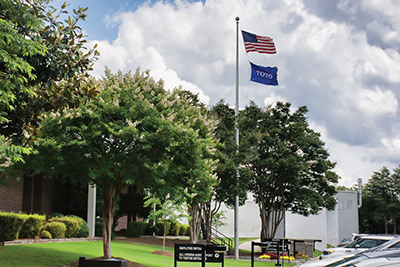 TOTO USA's headquarters in Morrow, GA,
was established in 1996.

In 1989, TOTO USA was established in California in response to the state's dramatic drought conditions and the growing need for water conservation across the U.S. With the TOTO's global reputation for manufacturing high-efficiency toilets in Japan, TOTO quickly became the favorite of both U.S. water conservation experts and consumers.

TOTO has been leading the way in water conservation in North America since 1989 when TOTO USA was established. TOTO uses computer modeling to simulate the characteristics of moving water to create optimal toilet bowl and trapway designs. As a result, TOTO toilets use a significantly lower volume of water than the standard 3.5 or 1.6 gallons per flush (gpf) toilets. TOTO has also been at the forefront of developing High-Efficiency Toilets (HET; 1.28 gpf) and Ultra High-Efficiency Toilets (UHET; 1.0 gpf).

TOTO's ability to develop products that work with lower volumes of water is a result of extensive, stringent flush performance testing methods, some of which have been adopted by U.S. water efficiency agencies and governmental organizations. In the Americas, TOTO was first-to-market with toilet design innovations such as wider flush valves and larger, computer-designed trapways, helping to improve flushing performance and reduce water usage across the plumbing industry. These engineering innovations have helped save billions of gallons of water in the U.S. since the early 1990s, especially in the commercial segment where high-demand commercial installations use thousands of gallons of water every day. 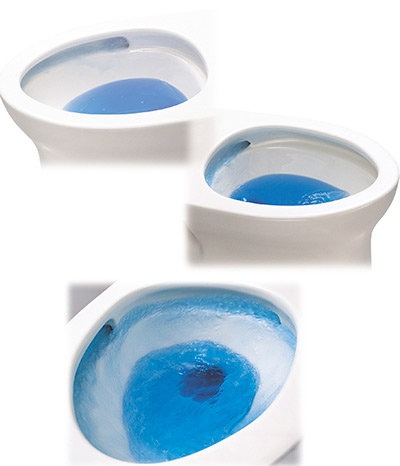 Anatomy of a High-Efficiency Flush Engine

To achieve the highest level of performance and bowl cleansing action needed to satisfy its discriminating customers, TOTO engineers went back to the drawing board and completely redesigned both the toilet's hydrodynamics and the bowl itself.

When these beautiful high efficiency TORNADO FLUSH toilets are flushed, three actions occur nearly simultaneously. First, the primary nozzle – located at the back of the bowl -- fires a high-speed stream of water that scours the rim and starts the water's Cyclone action. Almost immediately, a second water nozzle behind the first, fires another high-speed stream that provides 360-degrees of cleansing action. At the same time, the siphon jet harnesses the accelerating power of this rapidly rotating cyclone of water for unsurpassed waste removal at the modest 1.28 or 1.0 gpf volume.

To completely redesign the TORNADO FLUSH toilet's bowl, TOTO engineers removed the rim (a hollow tube) that overhangs the bowl on a traditional toilet bowl, punctuated with rim holes to slowly release water and remove waste. These traditional rims are difficult to clean because you cannot see or effectively clean trapped waste or matter from inside or beneath them. Instead, TOTO engineers 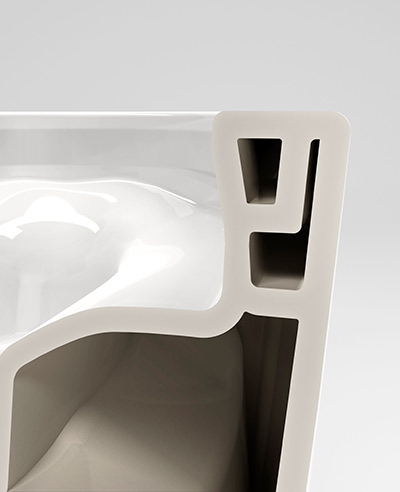 removed it and designed a concave rim around which the high-speed water jets could travel cleansing the rim and bowl, removing waste and debris with each flush, significantly reducing the time needed to clean the toilet.

To complete their new bowl design, TOTO engineers glazed the rim and bowl with CEFIONTECT, the company's nano-technology glaze, which seals the porcelain with an ionized barrier creating a super-slippery, non-porous surface that leaves waste nowhere to cling. In short, when protected by CEFIONTECT, the water that rinses the bowl and rim as the toilet flushes is all that is needed to effectively remove waste and dirt. It also reduces the need for harsh detergents, which are expensive and harmful to the environment.

With this background information in mind, let's take a look at one of TOTO's high-design, high-performance water-saving toilets, the Nexus.

Setting a New Standard for Toilet Design and Technology 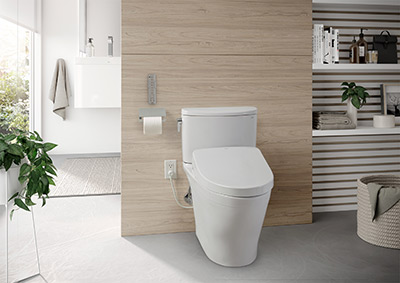 When TOTO set out to design a toilet that would set the new standard for design and technology, the company sought a set of attributes that would not only appeal to people today but in the future. After years of research and development, TOTO identified five core attributes – design, flushing performance, cleansing performance, ease of use, and sustainability.

TOTO redesigned its popular Nexus toilet to embody each of TOTO's core attributes and set a new standard in toilet design and technology.

TOTO's one-and two-piece Nexus Toilets and WASHLET+ models boast a beautiful modern design with sleek lines and a skirted bowl, making maintenance a breeze. They bring a timeless elegance to any bath space. 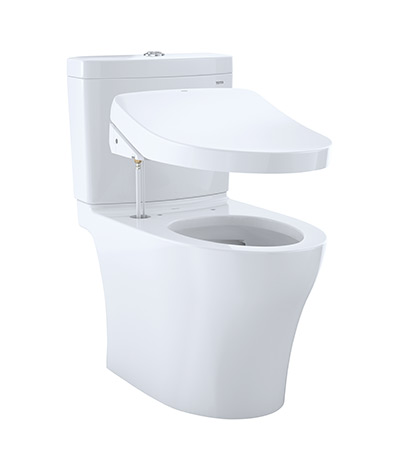 The Nexus WASHLET+ toilet is designed to seamlessly connect with a TOTO WASHLET, leaving no protruding supply connections (water or electrical). Called WASHLET+, this design improves the Nexus' appearance and cleanliness by inhibiting dust and dirt buildup. With the WASHLET+ connection structure, the Nexus' WASHLET+ bidet seat can easily be attached and detached to reach areas where dust and dirt tend to collect. This new design is just one of the ways TOTO makes it easier to keep the Nexus WASHLET+ toilet cleaner longer.

The new Nexus WASHLET+ toilet is Auto Flush compatible. That is, to its WASHLET+ design, TOTO added a new sensor-operated auto-flush feature. TOTO's proven touchless technology enables the toilet to automatically flush when the user simply rises and walks away. There is no need to wave a hand over a sensor to activate it; the unit responds automatically. In addition, users may manually flush the unit if they desire by using the toilets' trip lever. 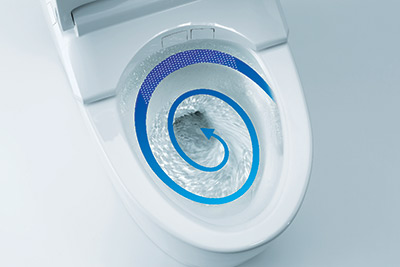 waste buildup and keeps the bowl cleaner. Using only 1.0 or 1.28 gallons per flush (gpf), this high-efficiency system is more effective in one flush than most toilets are with multiple flushes. Its modern hole-free rim design means that the Nexus WASHLET+ high-efficiency toilet performs more consistently and is easy to clean.

First, CEFIONTECT, TOTO's nano-technology glaze, seals the porcelain with an ionized barrier, creating a super-slippery, non-porous surface that leaves nowhere for waste to cling. Second, TOTO's TORNADO Flushing System reaches and cleans the entire bowl and rim with every flush. Third, TOTO's proprietary EWATER+ technology ensures the cleanliness of the bowl's surface by misting it with electrolyzed water, which has a slightly acidic pH value, to keep the bowl and WASHLET wand clean. Fourth, EWATER+ is environmentally friendly, returning to tap water within two hours. With EWATER+, consumers will use fewer harsh chemicals or detergents, which are costly and harmful to the environment.

The Nexus WASHLET+ HET is 17" from base to seat. TOTO's ergonomic, universal design height design facilitates rising from a sitting to a standing position and makes this aesthetically-pleasing one- or two-piece toilet ADA-compliant. TOTO believes that great design, like great performance, is for everyone.

Beneath its beautiful contemporary exterior, the WaterSense labeled Nexus high-efficiency toilet is designed to deliver an unparalleled flush that clears the bowl the first time, every time, at a mere 1.0 or 1.28 gpf with its matchless TORNADO flushing system. TOTO's market-leading TORNADO System is more effective in one flush than most toilets are with multiple flushes. 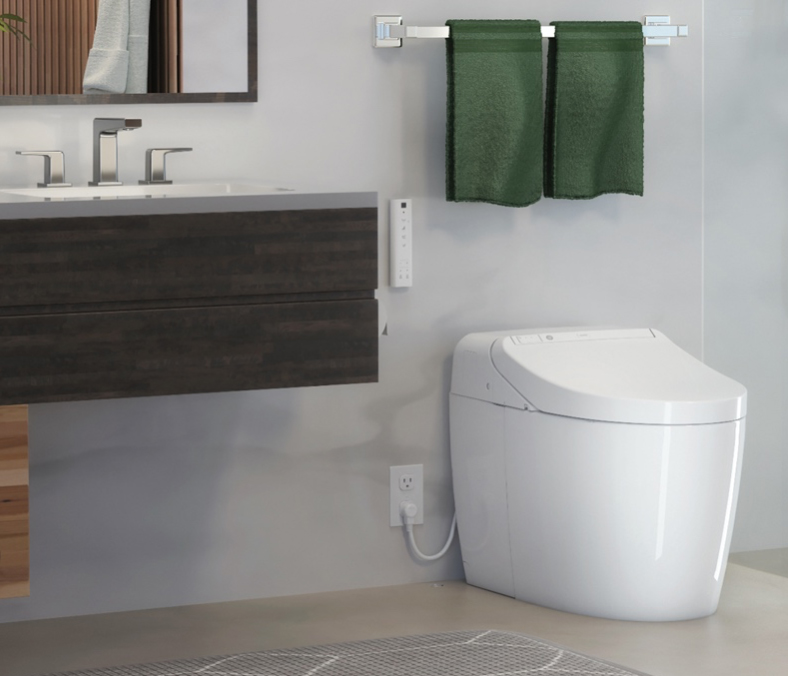 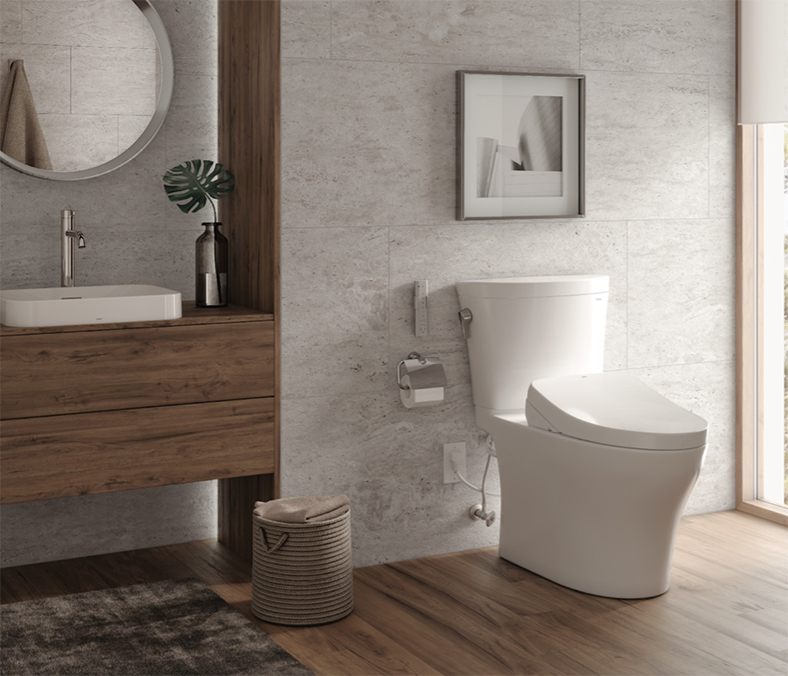 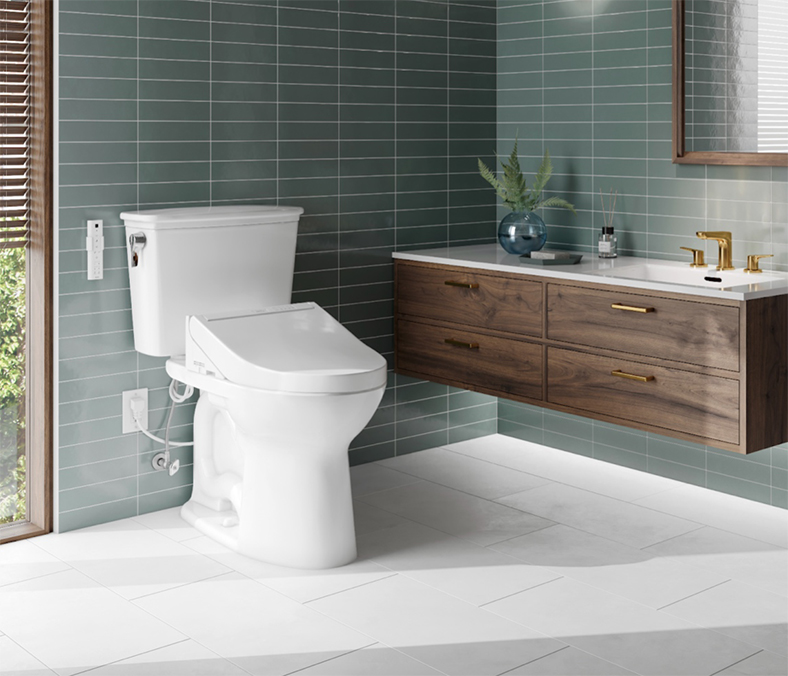